High-resolution thermal sights are the gold standard to detect, recognize and identify targets at night or in bad weather conditions. They do not need any illumination as they “see” the radiation, which passively is emitted by anything around us. This also significantly improves the capability to detect camouflaged targets at day time.

Since 2004 the thermal targeting sight HuntIR has been fielded as WBG-HaWa-Inf for the German SMP Infanterist der Zukunft (IdZ). In 2010 the follow-up sight RangIR with laser range finder, magnetic compass and ballistics calculator was brought into service as day/night fire control unit for the 40mm HV automatic granade launcher and – extended with some extra features – also as thermal reconnaissance and targeting sight WBZG for the second phase of the SMP IdZ-2 or Gladius.

Key demand for the dismounted soldier is minimum SWaP. Uncooled technology is therefore often used as a compromise despite of its lower performance. To provide the dismounted soldier with superior cooled sights, the BAAINBw has pushed the development of new IR-detector chips which provide cooled performance at SWaP comparable with uncooled sights.

Since 2018 the successor HuntIR Mk2 has been delivered as WBZG-HaWa-Inf for the German SMP IdZ-ES. Based on such technology, the next Gen sight HuntIR SW is ready for being fielded. 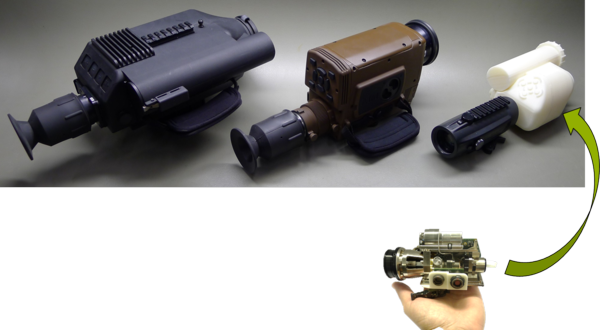